Although there is no lack of other books on this subject, even with the same title, the appearance of this new one is fu

This work was originally published in 1973, and appeared in a second edition in 1982 (Birkhauser), of which this is a re

Unlike other texts on differential equations, this one provides an early presentation of the Laplace transform before de

A new edition of this classic work, comprehensively revised to present exciting new developments in this important subje

The book contains seven survey papers about ordinary differential equations. The common feature of all papers consists i 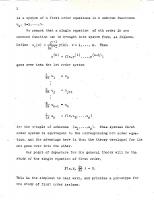 Solutions in the Large

General Remarks An ordinary differential equation is a functional relation

between an ·unknown function of one independent variable and its derivatives.

which involve derivatives with respect to several independent variables).

shall denot·e the general differential equation of order n (where n we write y(n)(x) on occasion for d n y(x) ) . We shall often dx

want to pµt F = 0 into .. standard form; that is we should like to solve for the highest order derivative, thus

The equation is called linear if it has the

is a sys~em of n first order equations inn unknown functions ui, i=l, ... , n. We remark that a single equation

of nth order in one

goes over into the 1st order system .s!_u

order system is equivalent to the corresponding nth order equation, and the advantage here is that the theory developed for the one goes over into the other. Our point of departure for the general theory will be the study.of the single equation of first order,

This is the simplest to deal with, and provides a prototype for the study of fi~st order systems.

We put it into standard form by the implicit function

We ·supp~·se f to exist ( be. defined as a real function of its arguments) in som~ domain D of the xy plane.

defines a direction field at every point (x,y) of D. we can find a function

defined in some x interval I,

that when substituted for yin y' = f(x,y) makes the equation an identity in x for x

the slope at each point of D for any·conceivable solution passing through ·that point.

of D, we can find at least one such function y = y(x) satisfying these requirements, and passing through P.

stipulation of continuity for fin D, this will turn out to be the case.

These last remarks implicitly suggest that in order to

attach a label to. functions y £ C(I) satisfying y' = f(x,y) for x € I, we append to the differential equation a side condition of the ~orm y(x 0

not guaranteed without a further condition on f. We turn now to specific examples which highlight our introductory remarks, and hint at other cons.iderations of importance. We note that it will occasionally happen (as in our first few examples to follow) that we can solve an equation explicitly in terms of the given data.

In contrast to elementary courses in

t he subject, which deal amply with such special situations, our emphasis will be placed in developing other aspects of the general theory, whose study will often be sufficient for the purposes at hand.

The reader interested.in this very special and

often difficult question of explicit integration of a differential equation is referred to Ritt, Integration in Finite Terms, and to work of Liouville. We remind the reader that the general linear equation of first order,

satisfies the equation in [a,~], and is that function for which X

has an answer in every case.

that solutions exist for all x.

This explicit solution is

Another example of solution.by quadrature is given by the non-linear equation describing the motion of a simple pendulum, d 2y . : fl. + "'r"' dx2 .LJ

The solution by quadrature leads to an . elliptic :integral.

the solution by quadrature of the non-linear equation

_gives the Weierstrassj_-function as the inverse map of an elliptic integral function. For the non-linear Ricatti equation

where the coefficients depend on x, solution by quadrature is no longer possible in general.

An interesting result for this equa-·

tion is its equivalence with the general linear equation of second order. fined by

Thus, in terms of a new dependent variable z de-

, the equation goes over into z

for the tri~le of unknown functions {x,y,z) in terms of a given triple of functions (a(t),~(t),r{t)), can be expressed by the single vector equation d dt £

If r is the position vector -

of a point Pin a rigid body rotating with angular velocity~ about a fixed origin, then the system above is just the familiar kinematical result for the instantaneous velocity of P. If .r, = .r,(t) is a solution, then 1~1 2 = c 2 = constant. Show that the new dependent variable A= A(t) defined by . ). = X

which is a stereographic projection from the sphere of radius c onto the complex A-plane, satisfies a complex Ricat~i equation. (For a more complete discussion of the Ricatti equation, see Darboux, Theorie

The following examples illustrate what is to be expected for the manifold of solutions of a differential equation. · The non-linear equation (y 1 ) 2 + y 2 = - l is an example of a real . equation with no real solutions (the direction field defined by this equation is everywhere imaginary), regardless of side conditions imposed.

and we can expect real .

solutions only for side conditions .of the form y(x0

We see that functions yc(x)

where c is a constant, and z 1 : 1, z_ 1 = -~the envelopes Or ye.) satisfy the equation. But so does any continu,ously differentiable

is similarly defined for x t f3 and x

infinitely many continuously differentiable solutions to the initial value problem ~

that exist for all x, but which, when restricted to a small enough neighborhood of x 0 ,