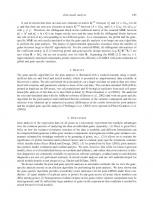 This book is very well written, in great detail and clarity. The title "Advanced" sounds daunting to some inte

mphasizing underlying concepts and principles, this concise guide describes the design of microarray experiments and the

1. I NTRODUCTION We discuss the problem of identifying differentially expressed genes from a set of microarray experiments. This problem has received much attention lately—see Dudoit et al. (2003) for a nice summary. The false discovery rate (FDR) (Benjamini and Hochberg, 1985) has become a popular error measure in this setting, see, e.g. Tusher et al. (2001), Efron et al. (2001), Storey (2002a), Storey and Tibshirani (2003) and Genovese and Wasserman (2003). In this short paper, we introduce the ‘miss rate’, which is the complement of the FDR. It is the proportion of genes that are truly differentially expressed, among those declared non-significant. We show how to estimate the miss rate in practice and discuss its properties both numerically and from a mathematical point of view. 2. T- STATISTICS , THRESHOLDING AND THE FALSE DISCOVERY RATE Suppose we have m genes measured on n = n 1 + n 2 arrays, under two different experimental conditions. Let xi1 = (xi1 , xi2 , . . . , xi,n 1 ) and xi2 = (xi,n 1 +1 , xi,n 1 +2 , . . . xi,n 1 +n 2 ) be the measurements for gene i for conditions 1 and 2, respectively. We start with some statistic for comparing the two conditions: T (xi1 , xi2 ).

∗ To whom correspondence should be addressed.

Examples of commonly used statistics include the Wilcoxon two-sample test and the unpaired T-test. For concreteness, we focus on the T-test but note that the ideas apply equally well to other test statistics. They also apply to other settings besides the two-sample problem, for example, the correlation of gene expression with a survival outcome. All that is needed is an appropriate choice of a test statistic. Let x¯i1 and x¯i2 be the average gene expression for gene i under conditions 1 and 2, and let si be the pooled standard deviation for gene i:    2 1/2 2 2 (x i j − x¯i2 ) 1 (x i j − x¯i1 ) + si = . n1 + n2 Here each summation is taken over its respective group (1 or 2). Then a reasonable test statistic for assessing differential gene expression is the standard (unpaired) T-statistic: Ti =

For simplicity, our discussion focuses on the two-sample problem and the unpaired T-statistic but it applies equally well to other settings and test statistics. Using the statistic Ti , we can simply compute its value for each gene, choose a threshold c and then declare significant all genes satisfying |Ti | > c. Table 1 displays the various outcomes when testing m genes. The quantity V is the number of false positives (Type I errors), while R is the total number of hypotheses rejected. The false discovery rate (FDR) is the expected value of V /R. Consider, for example, the microarray data taken from Golub et al. (1999). It consists of the expression of 6087 genes in 38 leukemia patient samples: 27 with ALL and 11 with AML. The objective is to find genes whose expression differs across the two types of leukemia. A histogram of the 6087 Ti values is shown in Figure 1: they range from −7.5 to 10.1. If the Ti values were normally distributed, we could consider any value > 2 in absolute value to be significantly large. But with more than 6000 genes, we would expect many to have |Ti | > 2 just by chance. We proceed by considering rules of the form |Ti | > c, for various values of the cutpoint c, and estimating the FDR of each rule by taking random permutations of the class labels. Here are the details: 1. Create K permutations of the data, producing T-statistics Tik , for features i = 1, 2, . . . , p and permutations k = 1, 2, . . . , K .   2. For a range of values of the cutpoint C, let Rˆ = i I (|Ti | > C), Vˆ = (1/K ) i,k I (|Tik | > C). Let π0 = m 0 /m, the true proportion of null genes among the m.  = π0 Vˆ / R. ˆ 3. Estimate the FDR by FDR

3. T HE MISS RATE Having derived a list of genes by using a rule like |Ti | > c, it is of interest to estimate some sort of false negative rate. Looking at Table 1, the quantity E(Q/W ) is what Genovese and Wasserman (2003) call the false non-discovery rate. This quantity is the proportion of false negatives among all genes with |Ti | < c. Since the vast majority of these genes have values of the T-statistic near zero, and hence, were not close to being rejected, this quantity would not usually be of practical interest. Consider, instead, some cutpoint c0 < c, chosen, for example, so that say 5% of the values |Ti | lie in (c0 , c). Then we call the miss rate the expected proportion of genes in (c0 , c) that are non-null. In detail, consider the definitions in Table 2. The miss rate is defined to be   Q0 MR(c, c0 ) = E . (2) W0 For example, taking c0 = 2.46 gives W0 = 305 genes with values of Ti in (c0 , c). The estimated miss rate for this interval, calcuated in a way described later, is 85.3%. Thus, we estimate that 0.853 · 305 = 260.2 of these 357 genes are non-null, i.e. differentially expressed across the two groups. The miss rate, MR, is estimated using the same information gathered for the estimation of the FDR. With W0 equal to the number of |Ti | in (c0 , c) and Uˆ 0 equal to the average number of permutation values

The miss rate serves as a useful cautionary statistic. The estimated FDR is low here (3.7%), so we are happy that only few among our list of 609 genes are false positives. However, among the next best 305 genes (all declared non-significant), an estimated 85.3% are actually non-null. Table 3 gives the estimated miss rates for successive intervals below the cutpoint of 2.89, each containing 5% of the genes. We see that the miss rate does not become low until we get down to values of the T-statistic around 2.0 When estimating both the FDR and the miss rate, it is possible to obtain values either < 0 or > 1. In each case, the corresponding estimate is set to 0 or 1 respectively. There is a close relationship between the miss rate and the local false discovery rate (fdr) defined in Efron et al. (2001) and Efron and Tibshirani (2002). The local fdr is the false discovery rate in an infinitesimal interval (c − ǫ, c). The miss rate is 1 minus the local fdr, taken over a large interval (c0 , c). In defining the miss rate, we have to focus on a larger interval to aid interpretability. Another important issue is the choice of the distribution for the test statistics under the null hypothesis. Here we have used a permutation distribution for the null, which is simple and convenient. But, as shown in Efron (2004), this can sometimes be under-dispersed, resulting in under-estimation of the FDR (and that is probably the case in this example). Efron (2004) discusses alternative methods for generating the null distribution of the test statistics. Finally, we point out that the miss rate, along with the FDR and local FDR are unidentifiable quantities in general, due to the fact that π0 is unobserved. If π0 were known, however, then all these quantites are identifiable. This has led to work on coming up with conservative estimates of π0 , which in turn yield conservative estimates of FDR, local FDR and the miss rate. The reader is referred to Storey et al. (2004) and Storey and Tibshirani (2001) 4. A SIMULATION STUDY We simulated data from p = 1000 genes and n = 40 samples, in two groups of size 20, All values were generated independent and identically distributed (i.i.d.) N(0,1) except for the first 100 genes in samples 21–40, which were N (1.25, 1). Table 4 shows the results averaged over 50 simulations.  The simulation standard errors are < 0.01 for FDR, MR and their estimators. In general, both FDR  and MR do a reasonably good job of estimating the false discovery rate and miss rate, respectively. When  over-estimates it on average, due to the truncation of MR  at zero. We also note the MR is low, then MR estimate πˆ 0 averaged 0.91, close to the actual value π0 = 0.90. Table 5 shows a second simulation example, as before but with 2000 genes, with the first 300 genes differing in mean by 0.25 units in the second set of 20 samples. Again, both estimates are accurate enough to be informative in practice.

Under some reasonable conditions, our estimate of the miss rate is consistent and under-estimates the true miss rate asymptotically. We call this ‘conservative’ behavior but note that this term might be confusing. The miss rate is meant to tell us that by choosing our cutoff at a point, c, say, then we are missing a certain proportion of genes near c but which were not included in the rejection region. The miss rate is meant to estimate this number and it is conservative to under-estimate just how ‘interesting’ these genes may be. The main assumption that is required is that as both the number of genes m grows and the number of permutation samples K grows the empirical distribution functions m  = 1 F(t) I (|Ti |  t) m i=1

converge uniformly to non-random limits, say F(t) and F0 (t) and that the proportion of true nulls π0,m = m 0 /m converges to some limiting proportion 0 < π0 < 1. The simplest example under which these conditions are satisfied are when the genes are independent; the null distribution of each Ti is the same; and the active genes are drawn i.i.d. from a mixture distribution so that the alternative distribution of the T s are also identical (Genovese and Wasserman, 2002; Storey and Tibshirani, 2001). For a more precise description of the necessary conditions, the interested reader is referred to Efron et al. (2001), Storey et al. (2004) and Storey and Tibshirani (2001) for further details. The distribution function F0 can be thought of as the ‘null’ distribution of a typical inactive gene. For many models, this null distribution is the same across genes but, in general, it is possible that the null distribution is different across genes, in which case F0 is the mixture of these null distribution across genes. The distribution function F can be thought of as a mixture which puts weight π0 on F0 —the ‘null’ distribution of Ti and weight (1 − π0 ) on the ‘alternative’ component F1 . If F and F0 are continuous, so that the quantiles of the |Tik | also converge, then the estimate  π0,m also converges to  π0,∞ , (see, e.g. (Storey, 2002b; Storey et al., 2004)) and Therefore, asymptotically

both in probability and expectation (Efron and Tibshirani, 2002; Storey et al., 2004). Thus, our estimate of M R(c0 , c) is asymptotically conservative and the true miss rate is actually higher than our estimate on  was usually close to MR average. In our simulation experiments, the bias in πˆ 0 was very small and MR on average. 6. D ISCUSSION The miss rate (MR) represents a useful cautionary statistic, when interpreting the results of a comparative gene expression study. In situations where the FDR of a list of significant genes is low, the miss rate of genes that were not quite called significant can be quite high. The same information used to estimate the FDR can be used to estimate the miss rate. We suggest that the miss rate be routinely reported along with the FDR and the local false discovery rate, in gene expression studies.